Bloodstained: Ritual of the Night | Review 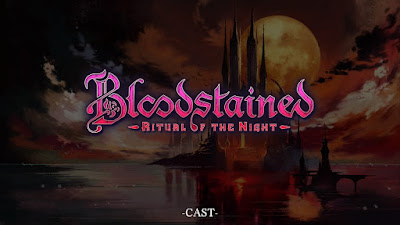 I was a bit too young for Castlevania games when Symphony of the Night first came out.

We were a Nintendo family, and didn't really move to Sony until the PlayStation 2. Because of that, I try to catch up on many of the games I missed during my childhood; games like Metal Gear Solid, Ape Escape, and other gems. Symphony of the Night came onto my list very recently when I became enamored with Castlevania as a whole. And while I can get the experience, I'm excluded from the feeling gamers got in 1997 when Symphony of the Night birthed Metroidvania.

But as I played through Bloodstained- as I solved the puzzles, fought the secret bosses, and got the best ending- it made me feel something. I didn't get that feeling people got when they played SOTN for the first time, but what I felt playing Bloodstained must be the same thing. 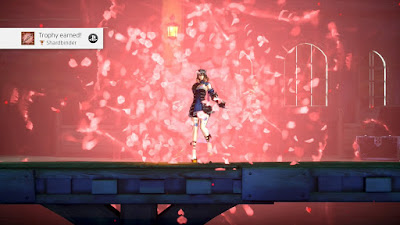 Bloodstained was born from the mind of Koji Igarashi, the director of SOTN, and his influence can be felt from beginning to end. The game follows Miriam, a young girl in search of her friend Gebel. Both Miriam and Gebel are shardbinders- people who can manipulate shards of demon energy into various powers. There is a shard for almost every enemy in the game, and almost all of them have their own unique attack or ability. Sometimes that means blasting foes with the primary elements, sometimes it means creating a rotary drill to slice through whatever stands in your way. My personal favorite is summoning several paintings to use as a shield. No joke, I've defeated two or three bosses with the power of high art.

The creativity in the shards that you can use as you progress through the castle carries over to the weapons as well. There are dozens upon dozens of weapons in Bloodstained. I was still finding new weapons, armor and accessories(Most of which physically affect your appearance as well) well into the game, even as I neared the final boss. There are swords, staves, guns, shoes with knives on them- all of which create their own unique playstyle. Throughout my twelve-hour playthrough I switched between a gunslinger build with powerful bullets, a mage build that lowered mana costs and let me blast whole screens with lightning bolts, and a critical hit-focused Katana build that- at some points- decimated every enemy I came across.

The best way to describe it is that there truly is no 'wrong' way to move from point A to point B, you can use whatever you pick up, craft, or buy and it will get the job done more often that not. My first game was focused on primarily buffing my Katana to do as much damage as I could through parries and combos, but my new game plus is focused entirely on kicking the hell out of everything I can with the aforementioned knife shoes. Their are even shards that passively buff certain weapon types, increasing their damage and attack speed. 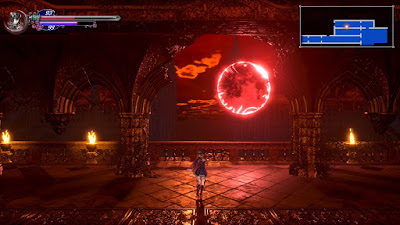 The castle itself is a wonderful, expansive locale with a variety of environments I didn't expect. Yes, there are the castle corridors one would expect in a game adjacent to the Castlevania series, but it expands into deserts, underwater grottos, and scientific labs where nightmares are born. Not only do the environs change, but the means to traverse them as well. Over the course of the game, I learned to double jump, speed from point to point in the blink of an eye, and even invert gravity itself. The classic beat of Metroidvania is being able to go back and find new secrets with powers you find as you advance through the game. Exploration is well-rewarded: Power-ups for your max health and mana, bullet capacity, and even a few secrets I won't spoil here, save for the fact that they made me smile from ear to ear. Bloodstained is easily one of the best examples of Metroidvania done flawlessly.

The blood that keeps the Metroidvania heart flowing, however, is the music. Michiru Yamane, who composed for both Castlevania: Bloodlines and Symphony of the Night, put her, ahem, heart into this game's soundtrack. To be perfectly honest, I have high-standards for my video game soundtracks. It's the difference between me listening and booting up Spotify. Outside of farming for materials to craft things, there was not a single time I turned off this game's soundtrack. Entering a new area was like an auditory birthday gift, because I was always greeted with new track that impressed. After I finished a game and unlocked the sound test, I was listening to the soundtrack for an hour afterward.

Seriously. Listen to this.

I entered Bloodstained excited, and left it in awe of how far it come. I watched this game go from nothing more than a few concepts and music snippets to one of the best video games I've ever played. As someone who was more than a little wary about the concept of Kickstarter(and having been recently burned by the Mega Man successor that shall not be named), this game is proof positive that sometimes, crowdfunding makes magic happen.

But, as always, there is one question that I've been dying to answer: 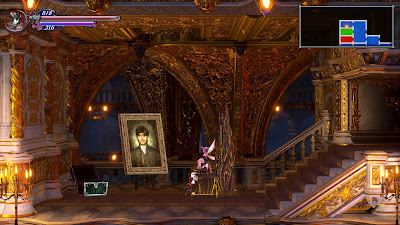 Long Answer: Beyond a shadow of a doubt, yes. This game set out to be a singular thing: a Metroidvania game- an Igavania game- in the style of games long past. It set out to take the good and bad from games like Symphony of the Night, and make them available for a new generation of people. It succeeded, and then some. As a Castlevania fan, I enjoyed hunting down enemies of various sizes with a mind-numbing variety of weapons and abilities. As a Metroid fan, I enjoyed exploring every nook and cranny in search of lore and secrets. As a gamer, I got to experience a one-of-a-kind game from a one-of-a-kind master of the Metroidvania genre, with genuine love and care poured into every facet of creation. This game made me feel at home, and I cannot wait to go home once again.

When not vehemently shouting, 'Arise, my self and my shadow!' at her anime posters, Noelle 'Lyneriaa' Raine can be found sharpening her wooden stakes and silver bullets on twitter @Lyneriaa.
Posted by Natalie Raine at 12:57 AM