The frontrunner to EA's conference, Star Wars Jedi: Fallen Order was announced last year, but this gameplay demo is the first time we've truly seen the game in action. It's opens on the Wookie homeworld Kashyyyk with a bit of platforming(complete with some wall running a la Mirror's Edge) before meeting with a nearby group of rebels. With the goal of freeing some captive wookies from a nearby Imperial Refinery, protagonist Cal Kestis(who unfortunately is every protagonist you've seen in every video game ever) tears right through a nearby group of stormtroopers.

They don't exactly put up much of a fight- one blaster bolt sent back at them kills them, though that's been the case for most stormtroopers, so I won't fault that design choice. We also see some force powers in action: One stormtrooper is yanked towards Cal and impaled in the gut, another gets the classic 'throw the lightsaber from a distance that is in every Star Wars video game' technique, and another is put into stasis for a few moments. A lot of it we have seen in previous games, right down to the force meter.  I was a little sour on the combat at first as well, but that changed as soon as we saw the first extended one-on-one fight; there was much more spectacle with the enemy that actually defended itself, so I hope we experience that more often than just one-shotting stormtroopers.

After it ended, I was very on the fence if I was interested or not, and I still am. Nothing really made me need to play this game. There's been a lot of hype the past few months about the single-player Star Wars game, and I really need to see more before I can be sold on it. 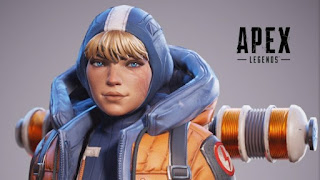 Apex Legends, the battle royale that stole everyone's hearts after the Fortnite Flood took over, has a Season 2 beginning next month, with all the shiny perks that entails: New weapons, a new champion(Wattson, pictured above), a ranked mode, and of course a new battle pass. Apex is 100% my Battle Royale of choice(mostly because Wraith is so fun to play as) and Wattson also has got me feeling excited, so I can't wait to jump back in on July 2nd.


Battlefield V opens up with a new map, Marita, which is gorgeous to look at. The bright autumn leaves paint a beautiful picture amidst the combat, which was confirmed will be available next month. Next was the hilly desert Al Sundan, based on one of the solid single player experiences from its War Stories mode. It's massively open and there appears to be very little cover, so vehicles will likely be the name of the game. It also promised more 'personal' infantry exchanges in later maps down the line. Finally, it revealed the next Theatre of War, the pacific, where the US and Japan enter the second world war. Everything was pretty to look at, but I'll be waiting to see how they play before I can decide if they are good or bad.

Seriously. Look at that trailer.

On a serious note, a big part of the FIFA presentation was a return to the street that birthed football. I'll be honest, I've never played a FIFA game in my life, but these new features are honestly pretty enticing(As long as you aren't buying on the Nintendo Switch). 3v3 to 5v5, with the option to use professional teams, in gritty urban areas that are more akin to what most people who casually play would experience. You can have a male or female character with what sounds like solid customization options as well. For what it's worth, as someone who is still unlearning the word 'soccer', I cannot wait to get my hands on this.

Madden 20 Is Still Madden I Guess

So fun reminder, you don't have to be excited for every game! For me, that game is Madden 20. I don't like American football. I just don't. So video games like Madden don't appeal to me. I hope it does well and I hope the fans of the series enjoy it, but that's really all I can speak on it. It wouldn't be fun for the people who are excited for it to see me trash talk without having ever enjoyed the series in the first place, so I'll just move on.

The Sims 4 Gives Me The Island Vacation I Can't Afford


I have an ungodly amount of hours in the Sims 4. It's, after some thought, my favorite entry in the series. This forthcoming expansion pack ensures that I won't be uninstalling it any time soon. The Island will be open water- you can swim, snorkel, and seemingly pilot boats? My guess would be to travel from island to island. Most importantly, you can be friends with dolphins. I really don't think I could have been sold on something more effectively than 'Become Friends With Sea Animals'. Best of all, you can take this vacation on June 21st on PC(and July for Mac users).

Anthem didn't receive a main slot, but there was a quick interview with lead producer Ben Irving. There is a lot of talk about the public test server, where they are taking feedback from players. They are dedicated, I will give them that; they(like most developers in the position), are intent on bringing the game to a better state. I was never personally interested in Anthem, but I hope that those who enjoy it are left with a more favorable product.

The big sticking point for me is that I really wish I cared more for Fallen Order. Star Wars has my favorite science fiction universe, my favorite movie soundtracks, and some of my favorite characters in media. But I wish its single player games received more care. All of it seems so...traditional. All of it I've experienced before. I was really hoping after the phenomenal adventure I had with Iden Versio in Battlefront 2's Single Player that they were on the upswing. Iden was her own character from a perspective we almost never see.

Cal Kestis has exactly none of the things that made Iden Versio appealing. How is that possible? He's a jedi, the thing anyone who knows anything about Star Wars is the most familiar with, and the character that isn't a force user is more interesting than him. This was such a cool opportunity to catch us off guard with a unique perspective from an alien species we could learn more about over the course of the game. A Twi'lek or a Cathar would have been mind-blowing, for example. But a cookie cutter protagonist with force powers I've seen and used in a dozen games before does not draw my attention enough to keep me invested. I will keep an eye on Fallen Order, but my expectations are not high.

My Fan Favorite?
On the other end of the spectrum, of all the things I was expected to be excited about from this conference, FIFA 20 would have never made that list. I was as apathetic to the FIFA series as I was the Madden series. But the way they sold street football, how they brought it down to a more personal and casual level, and the promise of a  customizable female avatar to experience them in is a satisfying way to bring me to the football side. The Sims 4's Island Living expansion is a tight, close second, but because FIFA came out of nowhere and sold me on a genre I had no experience with, it's without a doubt my most anticipated game from EA.


The Full E3 Conference can be found here. Noelle 'Lyneriaa' Rainier, when not practicing how to enthusiastically shout the word 'goal', can be found on twitter here.
Posted by Natalie Raine at 2:30 PM