Realm Royale Finally Won Me Over 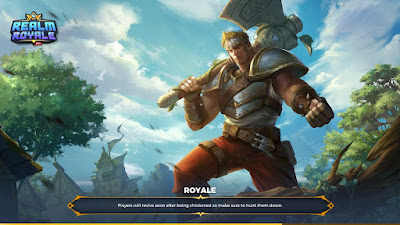 A while ago, I swore off taking Battle Royale games very seriously. I'd been through enough Battle Passes and repetitive challenges to last a lifetime. And yet, if you would have told me that I would be playing and streaming Realm Royale, seven tiers away from finishing the Battle Pass and slowly but surely making my way towards Platinum tier, I would have called you a liar.

But, here we are.

When Realm Royale was first announced, I was mostly indifferent about it. This was back when Battle Royale was at its peak as a genre, and Realm Royale was comfortably nestled amongst bigger names like Fortnite and PUBG. Unfortunately, I was pretty deep in both of those games, and then Apex soon after, so I gave Realm Royale a 'thanks, but no thanks, and went back to praying for Epic to take Fortnite's esports seriously.

All the while, Realm Royale was doing what I hope all games people forget about get to do; improve over time. Coming back into it a week ago on my Switch, the differences between what I played at release and the current build are night and day. Yes, there are still bugs- One of my teammates T-posed in the middle of the game and was stuck that way- but overall, I had fun with every match I played.

I think a large part of this is because of two things: First, the fact that it takes place in the same universe as Paladins. While there is lore in Paladins, it is focused on the champions that you play as. Realm Royale is more personal and breaks away from the war between the Paladins and the Magistrate; the various skins, to an extent, show off the various races and people that inhabit the Realm, and there are no voice packs to worry about here. With the in-game chat system(though typical chat is also present), you can see each character's personality through their jokes and quips during a match.

The larger part of it, however, is definitely my platform of choice: The Nintendo Switch. No longer distracted by the mountain of games on my PS4 or PC, Realm Royale feels right at home on my mobile console. All of the Hi-Rez games have found a third home on my Switch, but Realm Royale has gotten the most of my attention. The Joy Cons are surprisingly comfortable for me, though it took some getting used to at first. I definitley see myself buying a pro controller if I'm seriously inclined to see how high I can go, and to be honest? I think I do.

There is an oddly magical sweet spot where Realm Royale lies: It has the animated, almost-cartoony aesthetic that I enjoy about Fortnite, and the weaponry and gameplay that I love about Paladins. It's really the pineapple pizza of battle royale games; if you don't like it, that's fine! But you're also way cooler if you do.

When not dying on the pineapple pizza molehill. Noelle 'Lyneriaa' Raine can be found flirting with fondue salespeople on twitter @Lyneriaa.
Posted by Natalie Raine at 3:57 AM