A Farewell To Assassin's Creed: Odyssey 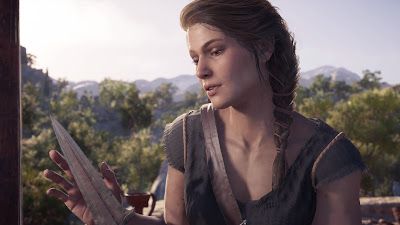 This month, the masterpiece that is Assassin's Creed: Odyssey will receive its final update.

It will bring about the return of past epic encounters, more Orichalcum for bringing them down, and most importantly, a winged unicorn- I mean, horse called the Melaina, and it will be free to everyone who owns a copy of the base game. It's a fabulous and fitting end to a satisfying year of exhilarating triumphs and tragedies with Kassandra and Alexios. Truly, I'm sad to see it end.

One year ago from the time I started writing this, I bought AC:O at the end of a stressful work week. When Assassin's Creed started setting its games in various time periods, I had been drooling over the possibility of Ancient Greece. I've always loved Greek History, and the thought of fighting Templars while visiting landmarks and meeting philosphers checks all the right boxes for me.

As soon as it was announced that AC was going Greek,  I distinctly remember screaming in my Discord call, to the annoyance of my friends. I even skipped over all of the previews and trailers to get to experience everything fresh. When I finally did get to play that lovely October evening, I was awake well until the next day. For the first time since Assassin's Creed: Revalations, I was in love. 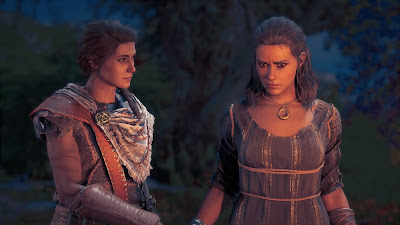 Not since Ezio Auditore did I ever enjoy a character as much I did as Kassandra. She was both confident and emphatic; not afraid to kick someone off a cliff, but willing to share a moment with a loved one as well. She also loved men and women, equally and freely. There aren't many strong female leads that can pull off sexuality that are well-written and don't feel as if they are made to be gawked at, but Kassandra fits the description quite nicely.  There was no one I would rather have at my side while I gawked at many of the same structures and landmarks from my history books.

Of course, in between all the smooth talk and glib insults that Kassandra frequently throws out, there were also battles to be fought and political leaders to be assassinated. The combat had evolved quite far beyond from what I had remembered playing Revelations in my bedroom, feeling so much more fluid and alive than in previous games. The flash of steel when you time a parry and solid vibration you feel when you land a meaty hammer swing both feel and look good. The slow motion effect when you dodge an incoming swing before immediately countering also was fun to execute- especially if you do it while wielding fast swinging daggers or swords, allowing you to quickly sneak in multiple swings.

I was not at all sad to see the hidden blade replaced with Leonidas' spear- It was so much more fun seeing how the spear was used in combination with the spears, staves, and other weapons. Not to mention, I was fighting with the goddamned Spear of goddamned Leonidas. The same goddamned spear you used at the beginning of the game in the Battle of Thermopylae until, well, you know. As soon as I threw the spear from a distance and quickly chained together assassinations, the Hidden Blades were shoved into the 'Gone and Forgotten' portion of my mind. 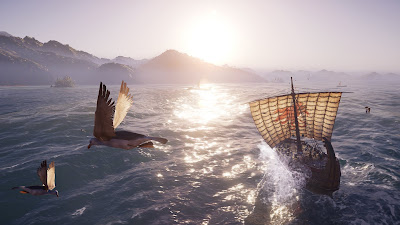 Assassin's Creed: Odyssey quickly became my comfort game. No matter how good or bad my day was, and no matter how long it has been since I last played, I could always count on Odyssey to be there for me. Did I want to test my brain a bit and see if I could take down an entire military fort undetected and then engage the Captain in Mortal Kombat? Do I want to do some of the brilliantly written side quests and meet more and more of the NPCs that truly feel like people? Or do I- at the last possible choice- actually progress the story and learn more about Kassandra's past? No matter what, I was having fun.

A lot of that has been bolstered by all of the post game content that was added- while there is still several hours of Season Pass content I haven't even broken the surface on, the base game also has had several new side quests that are less 'side quest' and more 'mini-adventure'. Each of them was given the care and detail of the main story, with more of the memorable characters I've come to expect over the course of the game. The base game alone is worth the price of purchase, but it's been blessed with more and more reasons to explore ancient Greece. 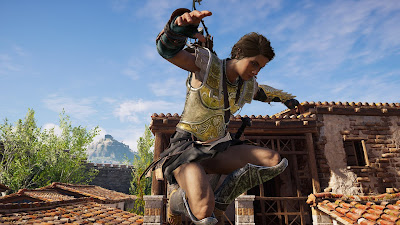 It's been a long year since I first played AC:O. I've changed, but I'm very glad that Odyssey did not; my friends were waiting for me, ready to sail the open seas and fight mythical creatures by my side. Regardless of where the series goes next, I'll keep my memories of Odyssey for a long time. With the final update incoming, I'll be popping in for more Greek adventures very soon, and longer after that.
It's less a 'Farewell', and more 'See You Later'.


That said, the Greek seas are calling my name once more, and I think there's an island in the distance with 'Noelle' written right onto it...

When not making copious amounts of love to an untold amount of Grecian folk, Noelle 'Lyneriaa' Raine can be found searching for domestic eagles on Twitter @ Lyneriaa.
Posted by Natalie Raine at 2:00 AM