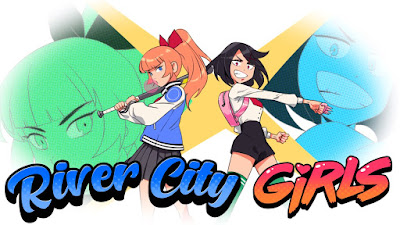 A few years ago, I was adamant that Scott Pilgrim vs The World: The Game was the best beat'em up in the genre. The story was fun and silly, the music was great, and above all us else, it was fun to punch people in the face. I feel much the same way about River City Girls- and honestly? I think RCG has the slight edge.

In a year where I've examined the significance of both complexity and simplicity in gaming, discussed an obscure J-pop track, and defended the rights of games commonly derided as 'clones', I wanted to sneak in something more relaxing that didn't go thematically beyond 'go here and punch this person'. On a basic level, that's what River City Girls is- what makes it different, and I would argue better, than the rest is how it executes that goal.

From a plot perspective, it's pretty simple and serviceable; Misako and Kyoko are in detention when they get a text about how their boyfriends have been kidnapped, and because all problems in River City can be solved directly through confrontation, they break out to save them. I switched between both of them as I played through the game, and they're both a welcome break from the generic tough guys that tend to usually pop up. The voice acting from everyone involved is also very good, and you'll definitely recognize one or two voices if you've been on the internet long enough.


I was expecting a linear experience, but I was pleasantly surprised to find the game opens up pretty broadly once you finish the first chapter. Suddenly there are stores where you can buy accessories that provide special effects, and restaurants where you can buy food for healing items(that also give a permanent stat boost the first time they're used, so you're encouraged to try them all). You can also purchase new attacks from- holy shit- Billy and Jimmy from Double Dragon. Between all the running and punching you'll be doing, you'll find lots of people hanging out and chatting with each other in neighborhoods, hilariously unbothered by the teenagers beating the hell out of each other and other adults. I suppose that they're just used to it?

The world is nicely animated and the writing is both silly and entertaining, but the area where River City Girls should- and does!- shine is in the combat itself. There are light attacks, heavy attacks, and special attacks, with unique animations and attacks for both playable characters. Many of the attacks send enemies soaring into the air or to the other side of the screen, and I had a lot of fun stringing together as many crazy juggles as I could before smashing them into next week. The variety of attacks you both learn through leveling up and purchasing new ones was also surprising: Some of them were callbacks to other fighting games like Street Fighter- both Misako and Kyoko have special attacks reminiscent of Karin and Chun-Li- and others are more straightforward. Most importantly, you can do this.

You can also block and parry, but these didn't always work as cleanly as I would have liked. I've done more parries accidentally then intentionally, but blocking is a bit more reliable if you time it well. You can also not worry about defense at all and go full offense with your extensive move list, and still succeed more often than not. I also wasn't a big fan of the bosses; they tended to fluctuated between easy and infuriating. The first two bosses have pretty big 'hit me now' animations after their attacks, and the third boss weirdly is part bullet hell on a 2D plane, where you only get an opening after bouncing an attack back at them at a precise angle. The difficulty spike from 'Hit them now' to 'dodge all of these things' is pretty apparent, and it was the only real time I was unsatisfied. This is partly alleviated by the writing and personalities they have, but the point should still be made. 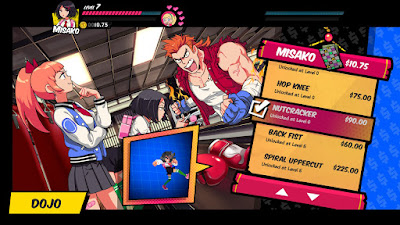 To be honest, the best part of this game isn't the gameplay. It's the personality that comes with it. The opening cinematic is so bubbly and excited that I never skip it whenever I start playing it. Misako and Kyoko's character portraits will occasionally animate and they'll chat with each other. You can spend money at shops belonging to both the Lee Brothers and Skullmageddon. River City is such a unique place to explore that I would love to see even more of it in further games. While the game itself is definitely worth your time, it's the little parts that make the whole a satisfying package.

Should you play River City Girls?

Long Answer: River City Girls hits all the right notes; the combat is solid, the soundtrack is infectious, and it has a distinct personality that fits snugly into WayForward's catalogue. Above all else, it's a fun, bouncy packages of good times that I'm glad I experienced before the year was up. And I cannot stress this enough, it is a real, actual video game where you can dab a group of people unconscious. This is the only thing you need to remember when describing this game to your friends.

When not keeping the dab alive through sheer force of will, Noelle 'Lyneriaa' Raine can be found happily ignoring all of her issues on twitter @Lyneriaa.
Posted by Natalie Raine at 1:02 PM