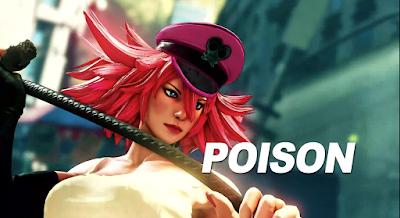 There's something about Poison that both worries me and excites me.

On one hand, Poison is a perfect example of how to absolutely not have a trans character. Definitley don't use transphobic language to describe them, don't subtly imply that violence against trans women is okay as they aren't 'real women',  and I don't know, don't half-ass whether or not they're trans in the first place.

On the other...I love Poison. I love her raw sexuality. Capcom obviously loves her, otherwise she wouldn't be in so many Street Fighter games. Hell, a Poison player won Capcom Pro Tour last year. I know Sylveon is the trans mascot, but Poison would absolutely be the one walking her Fairy Dog down the street and basking in the attention it would bring.

Unfortunately, she had to deal with a lot of missteps to become the boss bitch that she assuredly is. Capcom handled her in the worst possible way, and it began with the original Final Fight: 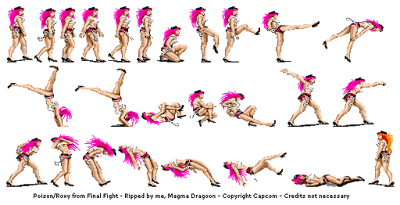 So picture this: your game, Final Fight, is coming to the arcades. It's an amazing game that will be talked about in the beat'em up genre for years to come. But, there's a problem; you're worried about the game depicting violence against its only two female enemies, Poison and Roxy. It's fine though, because they're 'transvestites', which is not the same thing as beating up women! Beating up trans women is totally different! This worked because 1989 was a different time, though Nintendo was not having any of that shit; Poison and Roxy were replaced by Billy and Sid in the Super Nintendo port of Final Fight.

The weird thing is that, for the next few ports of Final Fight games, Capcom was very wishy-washy on the matter of Poison(and Roxy if you remembered her name before this article). Sometimes it was just Poison and Roxy. Sometimes it was Poison and Roxy in longer outfits. Sometimes, they were Billy and Sid again. This was the pattern until Final Fight Streetwise, where Poison didn't appear at all. And thank goodness she didn't because...hoo boy. Hoooooooo boy.

So, for better or worse in terms of introduction, Poison is one of the earliest- if not the earliest- trans women in video games. "Good on you, Capcom!" I would say, if I didn't know the future. In reality, Capcom either gave a resounding ¯\_(ツ)_/¯ whenever Poison's gender was brought up, or gave horrible answers that showed just how off-base they were when it came to trans representation.

In the concept art for Final Fight, she is referred to as a "Newhalf", a slang term for trans women in Japan(Unbelievably, the term 'Newhalf' redirects to the 'Futanari' page on Wikipedia, which I do not have the time to unpack in this article). In 2007, Akira Nishitani, director of the original Final Fight, said that she 'could be male' (???) and that it was up to the player to make the decision themselves.  That's a bit of a cop-out, but okay. Akira Yasuda, Poison's original designer, has a much more direct position: He considers her trans in America, but cis in Japan. I mean...progress? I don't get how someone can be trans in one country and cis in another, but sure. Baby steps, but Capcom was clearly holding back on just letting her be transgender.

And this is before we even get to Yoshinori Ono, bless his misguided heart.

I love the guy, I really do. He's been a part of my favorite Street Fighter moments the past few years. But when it comes to Poison, he is able to masterfully, tactfully, give the worst possible answer every time. In 2008, he set the record straight that she was a 'post-op transsexual woman' in America, but in Japan, she 'simply tucks her business away to look female'.

So close. So close and yet so far.

In America, she's a trans woman. Great. But in Japan- because she just isn't allowed to be trans there for some reason?- she tucks her genitals so that she looks female. I would describe this as, somewhat obviously, still a trans woman. I don't get why they needed to douse her in PR spin every time someone brought it up. Based on the fact that they want her to be trans in one region, why would they not just say she's trans everywhere?

I can't even give them credit for at least trying, because in 2011, Ono changed his stance to not having one. In this interview with EGM, he states that Capcom doesn't have a canonical response, and that they want her gender to be 'mysterious'. I don't like this stance, because it doesn't really humanize her. By not just flat out saying she's a woman, and leaving it up to interpretation, it comes off as her not being a 'real' woman. If she was intentionally androgynous, I could understand, but Poison is clearly femme-presenting and is referred to with she/her pronouns. She is just as much a 'woman'- as if there is some metaphysical woman scale- as Chun-Li and Cammy.

He likens her to a Rorschach Test- that you basically see what you want to see, so Capcom wants to keep it open ended. I don't really like this take either, because there are no trans women that want to be 'seen' as men. What this comes across as is 'if you see her as a man, that's fine', and that is absolutely not. You really can't play for both teams when it comes to your trans characters- they either are, or they aren't. Don't dangle the representation over our heads like a dog treat to keep us satisfied.

Major props to the interviewer, Eric Patterson, for holding him to task during this interview. Ono basically admits to wanting to have his cake and eat it too. But from the way he worded it, it comes across that he would prefer she be a cis woman. I'm going to put the question and answer I'm referring to in full here, so you can better understand where I'm coming from:


He acknowledges that yes, there are not a lot of trans characters, and that he understands the need for them. But because there are a number of people that see her as a 'standard woman' (Read: cis woman), Capcom doesn't want to commit either way to please both camps. This is so painfully middle of the road, and the problem with middle of the road stances like this is that they ends up pleasing no one(like most centrist takes do). Trans folks don't get to have a clear, trans icon, and people who would rather she be cis are also left unsatisfied because there is no answer anyway. This is the same problem I have with ambiguously gay characters and queerbaiting romances; Capcom doesn't want to commit because they don't want to alienate the people who would rather she be a cisgendered man or woman. In doing so, no one gets what they want.

I really don't get this on Capcom's part, because as I've noted above, they clearly admitted that in America, she was considered trans.  In the very next question, when Patterson points out that other characters in Street Fighter X Tekken alluded to her not being a 'real woman', a Capcom representative quickly jumps in to point out that they were working with GLAAD to ensure Poison was represented well. This only further highlights the centrist divide Capcom has made- Poison is trans enough that they worked with GLAAD to ensure there was nothing problematic in Street Fighter X Tekken, but not enough for them to outright say, 'Yes, Poison is a transgender woman'.

Those six words- with no bullshit qualifiers, just those six words- would have been such a huge step forward. It wouldn't have been enough to perfectly excuse their blatantly transphobic decisions in the past, such as the- and I wish I was making this up- 'It's a Trap' brand temporary hair color, described as a product for 'Men, woman, and everything in-between(ugh)', but it would have been a start.

For a while, I thought I hated Poison, but that wasn't true. It wasn't Poison I hated, it was how Capcom treated her. Positive trans characters in video games are so few and far between that the ones we have- Poison, Ladiva, Birdo- I hold near and dear to my heart. Despite the fact that Capcom has continued  to fail her time and time again since 1989, Poison has been stealing hearts for just as long. Capcom might not have wanted her to be the trans icon she is now, but that's what she became. Poison(And Roxy!) are trans as fuck, and they don't need anyone's permission to be that way.

When not rolling her eyes at whoever greenlit that temporary hairspray, Noelle 'Lyneriaa' Raine can be found currently sick as a dog on Twitter @ Lyneriaa.
Posted by Natalie Raine at 5:11 AM