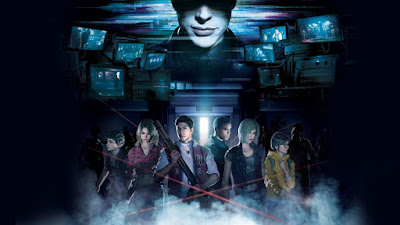 Capcom's attempts at adding a multiplayer experience to Resident Evil have been mixed at best. I loved the co-operative play in five and six, but was less keen on the competitive multiplayer and Umbrella Corps never hit any of the right notes for me. Resistance, however, may be Capcom's best attempt at bringing the tension of Resident Evil online.

Resident Evil: Resistance(Which can be downloaded if you purchased Resident Evil 3, and you should!) is a 4v1 multiplayer experience, similar to Friday the 13th, and Dead By Daylight. Four survivors are placed in an 'experiment' and must try to escape a series of rooms under a time limit, filled with enemies and traps placed by the sinister, player-controlled Mastermind. Positive actions(like completing objectives, reviving teammates, etc.) will add to the timer, while negative ones(dying being the largest) remove some time. As someone who spent an absurd amount of time playing the Mercenaries extra modes in RE5 and RE6, I felt right at home, especially when a remix of the mercenaries theme kicked in once the timer began to dwindle- it was like zombie-slayer nostalgia.

I was a little wary when I saw that the tutorial gave you infinite ammo, but thankfully that was not the case in the actual game. Playing as a survivor kept the tense, stressful atmosphere of the main games in a way that was genuinely surprising. Because the enemy and trap placement is entirely based on the Mastermind, there could be anything waiting for you on the other side of a door. Watching doors lock and lights go out before a pack of zombie dogs begin tearing into your friend with the key to the exit causes panic, and quickly. You can buy extra ammo and healing items once the match begins, but you have to be quick about it, because the timer is ticking as soon as the match starts.

Teamwork and a cool head are paramount if you don't want to see the words TERMINATED on your result screen at the end of the match; sticking together and helping your team at all costs will help you all stay alive and keep your timer high. Running off by yourself is an easy way to find yourself overwhelmed by enemies or, if you're really unlucky, getting your head turned into pudding by Mr. X or William Birkin. And those deaths add up, quickly; every time a teammate dies, you lose thirty seconds from your match timer, and I've lost matches by a literal second because of an unfortunately timed death. 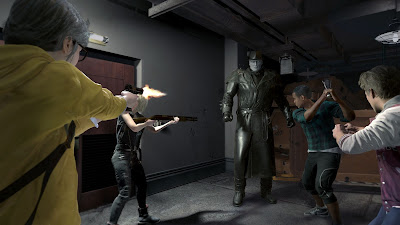 But the absolute best part of Resistance is, without a doubt, playing as the Mastermind. Not only is this the first opportunity we've ever gotten to play as heavyweight villains like Alexia Ashford and Ozwell E. Spencer, but more importantly, their personalities are front and center as they constantly taunt and chastise the survivors throughout the match. Spencer needs his slippers before he can focus on terrorizing the poor people in his experiment, and Alexia insists that she plans on 'burying' her mutated husband once he's no longer of use to her. Honestly, even if playing as the Mastermind wasn't already fun as all hell, Capcom giving the cast of playable villains their own personal intricacies as well as unique gameplay styles is the cherry on top of the supervillain sundae.

Their style of gameplay is fusion of Five Nights At Freddy's and tower defense, which sounds...awful, but it surprisingly works very well once you get your bearings. You track the survivors through the cameras, bouncing between setting the stage(setting up traps as you lock doors and cut the lights) and going for the kill by dropping various creatures, some of which can be personally controlled. Player controlled enemies are much stronger than ones controlled by AI, and a zombie under the control of the Mastermind can very quickly ruin a lone wolf's day- and occasionally an entire team's day. I played one match where, after leaving the safe room into a smaller room at the beginning of a match, a Mastermind-controlled Tough Zombie literally tore our entire team to pieces in less than two minutes. This is the exception to the rule provided your team is on their toes, but still, it was a little irritating.

The only real issue I had with the game was the network issues. There were quite a few games where the game told me in very large text that there were connection issues to the Mastermind during the match. Other games do this with just a wi-fi symbol or the like, but Resistance throws an entire textual statement over the bottom half of your screen. And when it does lag, you feel it; I've headshot zombies and not had the damage register for a cool two seconds.

The issues with the server are worrisome, especially with a game with such potential, but they don't change what is still a stellar and unique multiplayer experience. I was ready to give this game a little more than a glance before moving on to the also-stellar Resident Evil 3 Remake, but I was up all night until I finally managed to get a win. This is, without a doubt, my favorite attempt Capcom has made at bringing Resident Evil online.

As long as we aren't counting the co-op in RE5 and RE6. I'm still going steady with those games.

When not begging on her hands and knees for Capcom to support this game, Natalie 'Lyneriaa' Raine can be found falling in love with Jill all over again on twitter @Lyneriaa.
Posted by Natalie Raine at 10:26 PM