Wastelanders Is A Fine Time To Try Fallout 76 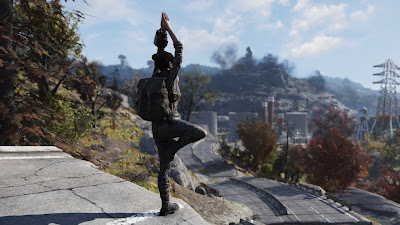 Before we begin, I think I should make sure we're on the same page. If you're of the opinion that Fallout 76 is a terrible mess of a game, you spit on Bethesda's grave, or anything similar, then this article isn't for you. Your opinion isn't wrong, but this won't be the Bethesda vitriol piece you want it to be. Not to say there is not ample to criticize them for, but that's not what I want to talk about here. I want to talk about what Wastelanders does to the original flawed Fallout 76 experience. And the answer is a lot, but sometimes not enough.

The big draw of Wastelanders is the return of people; actual non-player characters that you can chat with as they go about their daily lives. I was pleasantly surprised to see that the writing was at least on par with Fallout 3 in terms of quality. I know that we're still treating New Vegas as the gold standard, and NV it is not, but credit where credit is due, I think the writing was good. I was also surprised to see the return of skill checks, and most of them are definitely intended for late game characters. There would be skill checks with requirements of 8 in the SPECIAL tree or higher, which was surprising given I was no more than an hour or so into the game. You can actually cheese them pretty easily if you back out of the conversation and immediately use some chems, but still, they help revive some of the Fallout identity that 76 was lacking.

With people returning to the wasteland, I was also genuinely surprised that with them brought Allies, which are similar to companions in the previous games. While out exploring the greater West Virginia countryside, I heard a distress signal from someone named Commander Daguerre, an astronaut who picked the worst time to come back to earth. After inquiring about the status of her crewmates, she moved into my C.A.M.P(player-made settlements, basically) so that I could help her figure out just what went wrong on her trip to the stars. I'll be honest, I thought it was a little...weird at first? But after spending the past year with just the sound of my in-game radio and the occasional griefer for comfort, it was actually really nice to come back to my home and have someone to chat with. Not only that, they have quests and can be romanced! Romance! In Fallout 76! I can't believe I'm saying this, but I'm actually really glad that this was added. 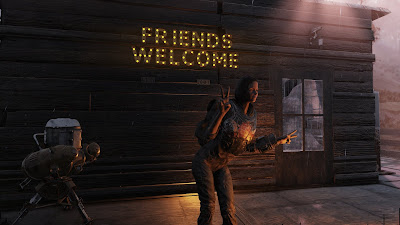 The game is still a little rough when it comes to performance, unfortunately; I tested it on both PS4 and PC, and it still doesn't feel as optimized as it should, especially for the graphical quality. On PS4, it still struggles to maintain that 30FPS, and even on my high end PC, I was still getting random stutters. At one point, I got two ten minute loading screens, back to back. The issue fixed itself after I restarted the game, but still- I was hoping Bethesda would make some under-the-hood optimization changes that would make the game run smoother, since performance has been my #1 issue with the game since release, and sadly is still my least favorite part of the experience. I still enjoyed myself, but I think the best way to enjoy this game is on PC, though I can't speak to how well the Xbox version performs.

The ultimate deciding point I should stress for you as a consumer is that, at its heart, this is still Fallout 76. If you enjoyed Fallout 76, this update is more than satisfactory, and more than enough to keep you playing until the next update. If you don't like Fallout 76- and I'm not a betting woman, but I'm willing to gamble that's most of you- then I don't think that this is enough to make you commit to playing it.

However, if you're in the middle of the road, I think it's worth a shot.

The best thing I can say about this update is that there is enough content in this game now that it's worth investing to decide for yourself. As someone who's had mixed feelings about the game- and still strongly believes that if it keeps getting supported, it will get to where it needs to be- I'm not sure if it excuses where the game began, but it does make me optimistic about where the game will go next.

When not living in the middle of nowhere with her astronaut girlfriend, Natalie 'Lyneriaa' Raine can be found social distancing on twitter @Lyneriaa.
Posted by Natalie Raine at 5:34 PM