This One Obvious Trick Made Me Better In Valorant 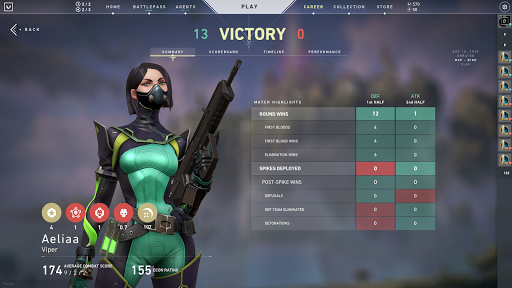 Look, let me explain. There is a reason for this title, I promise.

Valorant came out in June of this year, with a beta period in the weeks before. Like a lot of other people, I spent several days watching Twitch streamers I would probably never watch again(because let's be real, that is what everyone does during a Twitch Drops campaign) until I got my hands on a beta key. That was honestly the most fun I think I had with the game; when everything was new and exciting, especially for someone with the barest of experience playing Counter Strike, which Valorant takes several beats from. This was also where, I believe, everyone was terrible as they gradually learned what strategies worked and didn't work. For an absolute beginner like me, it was perfect.

As I've previously written before, that feeling of general unease and curiosity went right down to the abyss as soon as the game went live for everyone. For the first few weeks, if you were not ranked Global Elite in Counter-Strike(which apparently everyone is, judging by how quickly people bring it up without you asking), you were getting dunked on without remorse, game after game.

For someone who did usually okay, not top frag very often but certainly never bottom, it was like playing a different game. I was consistently- as in almost nearly every game- performing well below everyone else in the match. It was painful, for lack of a better word. To have such a sharp skill drop when I was doing just fine literally days before made almost no sense to me. Even when I put together that everyone's MMR(the underside metrics that fluctuate based on your performance) had been reset and we were all starting from the bottom-including people who had reached the highest possible rank during the beta- that wasn't a good enough answer for me; there had to have been something that kept causing me to under-perform.

After a while, I began to notice a lot of people would comment on my crosshair(which I will not be sharing because it was an abomination left to the void), mostly about how utterly horrible it was. To Valorant's credit, the level of customization you can perform on your crosshair is very deep and unlike anything I had seen prior. With that level of power, though, comes temptation. My crosshair was a square with another square inside it while also being bright pink. It was horrible and looking back, I can't believe I ever willingly took that crosshair into game. So after a few more stubborn losses, I decided to change it to just a green dot, No reticle, no fancy colors, just a green dot.

Here's my match history as of August 16th, the current day: 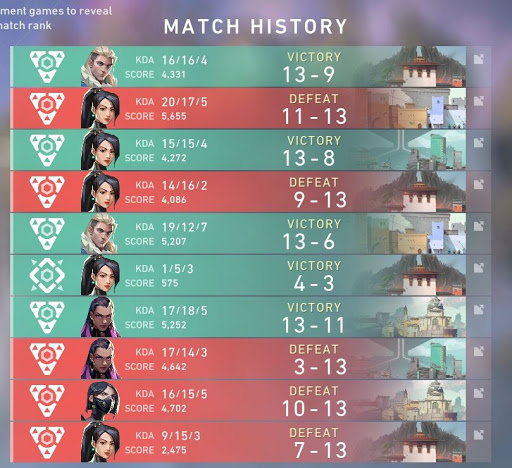 If you're willing to look past that unfortunate Spike Rush game where I was 1/5/3(mostly because we got entirely snipers that match and I can't use them to save my life), you can see for the most part I'm regularly able to at least get double digit frags, whereas before I was topping out at 1-3, maybe. That's how big of a jump I've made in capability, only by changing my crosshair. Why is that? Because Valorant is less about trading gunfire and more about making your first few shots count. With my old crosshair, it was hampering me by making it difficult to clearly line it up with my opponent's head, and this is a game where a headshot is capable of one-tapping(killing an enemy in a single bullet) if you're using the right weapons.

By changing it to a small green dot, I'm able to much more easily both line the dot with an enemy's head and not make it difficult to do so by covering up a lot of their body, especially at longer distances. With that one seemingly simple change, I've been doing much better than I was previously, and actually enjoying myself all the while. It just goes to show that you should be examining everything when it comes to trying to improve in your game of choice. In Valorant, it's important to know what angles to obscure and manage your resources carefully, but it's just as important, if not to more, to have a crosshair that doesn't impede your aim.

Seriously. I'm underselling it, but my old crosshair was just the worst.

When not avoiding writing this article because she is, ironically, playing Valorant, Natalie 'Lyneriaa' Raine can also be found being angry at the world on twitter @Lyneriaa.
Posted by Natalie Raine at 2:44 PM