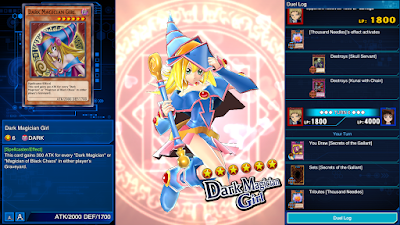 If you had told me that, in order to combat quarantine boredom, I would be playing Yu-Gi-Oh, a game I have not played since I was thirteen, I probably would have laughed. But, here I am. I've spent the past few days playing Yu-Gi-Oh, and having the time of my life. The reason? I think I'm in love with the Harpie Sisters.

A lot of this I owe to my nostalgia for the game as a child. I don't remember the reason why, but one day my mom had to pick up something from Target before she could drop us off for school, and she bought me a Structure Deck because I asked really nicely(a few times). Honestly, I didn't put much thought into which one I picked- I was mostly just really glad she said yes- and that one I picked had a cool bird on it. I didn't realize that the entire deck was focused on the Harpie Ladies until I got to school and played with my friends. 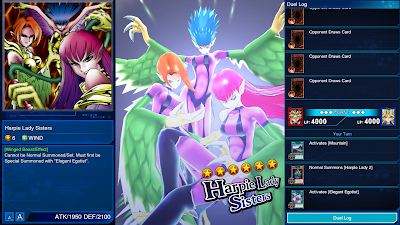 I loved the Harpie Ladies in this deck. Outside of Mai in the anime, I had pretty much forgotten they existed until I started using it that day; It was, easily, the most fun I ever had playing the game, and I stuck with that build until I would stop playing a year or so later. Even though I didn't play the game for very long after, that was where my fondest memories were.

A few days ago, I was having a bit of a nostalgia trip, clicking through the Yu-Gi-Oh wikis for the fun of it, when I landed on the pages for the Harpie Sisters. After a bit of reminiscing, it finally pushed me over the edge to consider downloading Duel Links, the online, formerly mobile-only Yu-Gi-Oh game I had been hearing about for the past few years. Not only was I excited about getting to play my favorite childhood card game, I could do it with Harpie deck again! I was, no joke, bouncing on my heels watching the download finish.

I played enough of the card game that I still remember the general rules and how to play, but I still think Duel Links does a great job of explaining the game to first timers. The tutorials are in-depth and the first few AI duelists are almost non-existent. Even if you've never played before, you'll cruise through the first few opponents pretty easily. I do recommend you figure out what kind of deck you want early on- it will save you gems and money in the long run by buying from the boxes you know will benefit you, rather than just buying indiscriminately to collect as many cards as possible. 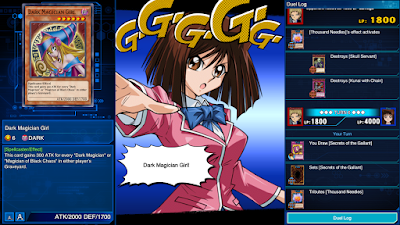 Because I had a game plan- level up until I unlocked Mai, who I could use to get the first of the many Harpie cards I needed- I knew exactly what boxes to go for and who to duel. Mai's been my spirit animal as I played through Duel Links; she's a tough, confident lady who loves her Harpie Sisters. She's quickly become my favorite character, even though you can duel as pretty much anyone who has ever held a Duel Masters card in the anime series, from the original to 5D's.

After a bit of grinding and the heart of the cards- ahem, luck of the draw, I was able to get two of the three big cards I needed for my Harpie Lady deck: Hysteric Party and the majestic Harpie Queen. Hysteric Party lets me summon as many Harpie Lady cards as possible provided I discard one other card from my hand, and Harpie Queen is treated as a regular Harpie Lady, but she's much stronger than the regular Harpie Lady cards and let's me get another important card- Harpie's Hunting Ground- as fast as possible.

I'll be honest- at first, it wasn't smooth sailing. The decks you get from the Legendary Duelists(the characters from the anime/manga) are the hottest of hot garbage. Do not- Do not- take those decks into the PVP arena without replacing the terrible low-damage monster cards they contain. Other players will rip you into pieces with card combos that defy belief. For the first few games, I was getting absolutely wrecked. But after some changes to my cards- and quite a few card packs from the absurd amount of gems it gives new players to get them going- my Harpie deck started to fall into place.

The only part of the duel links experience I'm on the fence about is the 'Skills' feature. Each Legendary Duelist has a series of skills that you can use to turn the battle to your favor. Mai has 'Aroma Strategy', for example, which let's her see what her next card draw will be. If you are Yami Yugi, however, you can use 'Destiny Draw', which allows him to draw any card he wants from his deck. They can have such a profound effect on the overall game that they almost go against the core of Duel Links' ideas, which trim a lot of fat from the card game to make it more accessible.

As soon as I started winning, though- winning with the same cards I did when I was a little girl- I was firmly hooked. This past few days has been a nostalgic whirlwind, constantly shouting 'I remember that card!' or something similar as I played game after game. Even as I write this article, I have Duel Links open in a different window, ready to dive back in and climb the Ranked ladder.

I'm a fangirl again, and damn proud of it.

When not roleplaying as a 3rd rate duelist with a 4th rate deck, Natalie 'Lyneriaa' Raine can be found  questioning her romantic attraction to a trio of bird women on Twitter @Lyneriaa.
Posted by Natalie Raine at 2:57 PM