Mass Effect: Andromeda Was The Game I Needed, When I Needed It 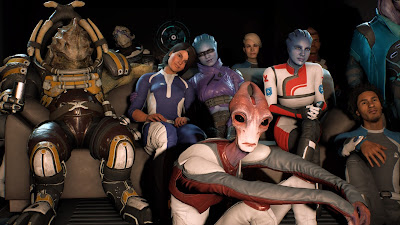 This is not an article about the feel-good Gorillaz song, Andromeda.


This is about my favorite game in the Mass Effect trilogy, and how it kept me alive. This is an article about how discovering new planets and meeting new friends overlapped into my real life, and kept me going when I had otherwise given up on myself.

This is about Mass Effect: Andromeda, and why it matters to me.

I actually was rather apathetic when I first heard about Andromeda. I was going to play it, of course, because it was a still a new Mass Effect game, but my attitude was mostly pessimistic. I was sure it would be fun, but maybe not what I wanted.

When it finally fell into my hands a few weeks before I moved across the country and away from my blood family, I was in a low place. I was 22, suffering from pretty crippling depression and anxiety, and debating if being alive was really worth the effort anymore. I hadn't told anyone this, but I was actually planning on killing myself after I turned 24. I thought I had seen all life had to offer, an endless cycle of working a job you hated to come home to a family that didn't understand mental health and whining about it to friends who could care less. No one, not even my closest friends, knew just how bad things were getting for me inside my head.

I don't know what miracle led me to meeting my friend Alex, but they knew some of the details about my depression and how rough things had been going. She told me one day, that if I wanted to, I was more than welcome to come live with her in Arizona. That would be a pretty radical change for someone like me, who had never lived anywhere other than with my parents. I debated the choice in my head for a few days, even as my mental health declined and declined. I could either stay in Michigan, and wait out the next year or so my life in emotional isolation until I finally ended my life, or I could move across the country, away from the only home I ever knew, and hope that things would get better.

I decided that- mostly on the grounds that things really couldn't get much worse-  I should move to Arizona, taking my then-miniscule collection of PS4 games, and my barely touched copy of Mass Effect: Andromeda. In between finding a job and making new friends, I spent every waking moment I could find playing it- even more so after I left my guild in Final Fantasy XIV. It started as little more than the awe that came from experiencing a new Mass Effect game. Then, it was so much more. 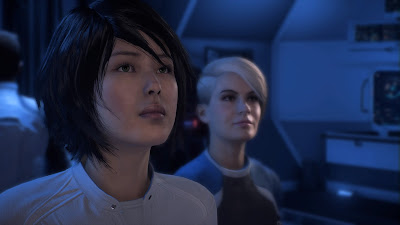 I...identified with Ryder. No one wanted her to succeed. No one believed in her. She was never supposed to be the Pathfinder, her dad was. She was now, quite literally, in a galaxy far, far away, with no family in sight.

It's hard to match a video game where you and the character can relate to the same experiences. I related to Celeste because she, like me, suffered from depression and anxiety for example(Not to mention the spoiler-tastic reveal at the end of the most recent chapter).  Sure, I wasn't leading an intergalactic expedition into space unknown, but I was entirely out of my element in a place completely unknown to me.

Things slowly but surely got better in my real life- I found a job I didn't hate yet and had made lots of new friends. Most importantly, I got to finally hug my internet best friend of 7+ years and the godchild I can't live without anymore. All the while, I was also spending more and more time playing Andromeda. I was exploring everything, searching every inch of every planet, doing as many side quests and getting to know all of my friends aboard my ship.

It certainly helped that Andromeda was the most fun I've had with Mass Effect's role-playing system. It asked a very dangerous question- what if you decided what your abilities were, regardless of your class? The original trilogy did a great job of introducing you to a wide array of abilities per class; Andromeda lets you take these abilities and combine them how you please, allowing you to create your own personal class. I combined my favorite classes- Biotic(read: Space Witch), Infiltrator, and Engineer- into what I defined as an Invisible Science Witch. It was all of my favorite things rolled into an eldritch abomination of skills and passives, and I wouldn't have it any other way. 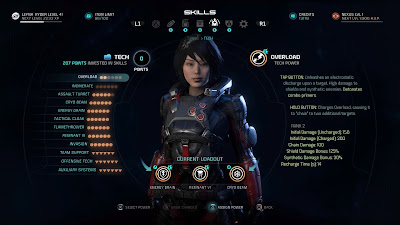 Not only did I enjoy exploring planets and trying out ridiculous builds. I also enjoyed getting to know my new friends in the Heleus cluster. I wasn't interested in comparing them to my old friends aboard the Normandy; no one was ever replacing them. That didn't stop me from happily spending as much time as I could with them. They, like your allies in the original trilogy, didn't come off as just characters; they came across as people. After I finished the movie night side quest- which, by the by, has the most satisfying ending to any side quest in the entire series-they weren't just friends along my intergalactic journey, they were family.

No matter what happened in my life for the first few months, good or bad, I couldn't help but return to Andromeda time after time. I saw in Ryder the role model for how I could shape my future; yes, she had been down in the beginning, but at no point did she ever give up. Even as what felt like every voice around expecting her to fail, she was still visiting planet after planet, making each and every one of them inhabitable however she could. Despite the immense pressure on her shoulders and the ever-present fear of failure, she was everything the Andromeda initiative needed her to be.

It has been a long time since I initially finished the game. A lot has changed too- I'm now proudly trans and happily open about it, rather than the confused and uneducated egg I used to be. Honestly, while my anxiety is still pretty serious, my depression is nowhere near as controlling of my mental state as it used to me, and I'm in a much better place. I'm actually happier now, writing about video games on the internet, than I ever thought I could be. Not only that, I'm 25, still alive beyond my initial planned suicide and no longer nursing those thoughts like I used to. Part of that happiness I owe to coming to terms with my true gender identity.

But another part, I owe to Mass Effect: Andromeda.

I can't change how people feel about it- that's not my job, and honestly? Life is too short to spend it policing people's likes and dislikes. But for me, this game is special. It gave me hope that, regardless of how I felt about myself, real happiness was never out of reach. It was my comfort game until I fell in love with Assassin's Creed: Odyssey. Both have a special place in my heart, but Andromeda is like the best friend who lives far away: No matter how long it has been, as soon as you see them, it's like they've never left.

Mass Effect: Andromeda came into my life when I was at my lowest, and it helped pulled me into the happiest state I've ever been. To put it simply, it makes me happy, and I think that's what all of us want from our games.

Now, about that Gorillaz song...

When doing unpaid promotion for the Gorillaz, Noelle 'Lyneriaa' Raine can be found(Politely!!) asking Bioware for an ME Trilogy remaster on twitter @Lyneriaa.
Posted by Natalie Raine at 1:27 AM