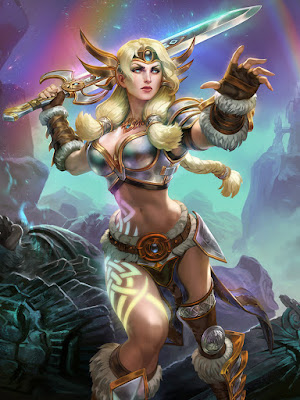 Balance is one of the hardest things to get right in a competitive game. No one wants to play the character with a two percent win rate, and no one wants to get stomped by the same character over and over again. That's why the balance portion of any game's patch notes are the most analyzed and debated with each update; everyone wants to see if their favorite is getting buffed or nerfed. No one knows this feeling more than Freya mains in Smite.

Freya is probably one of the most interesting Gods in the game. Her kit gives her CC that can both help or hinder her teammates, and her ultimate briefly makes her invulnerable to most forms of damage. Her first and second abilities, when combined appropriately, absolutely melt anyone without any resistances to her magic damage. She's been uniquely loved and hated for a long time.

Because of that, Freya's been changed again, and again, and then again some more. Most recently, she was reworked into a newer version with an alternate kit, or set of abilities. Since then, Freya has bounced between competitive Godslayer, and professional trash can warmer. She has unfortunately found one of the worst niches a character can have: The average player struggling to make an impact, and professional players destroying everyone they come across. She's been tweaked and changed so many times that even Freya mains don't even now what Freya is supposed to feel like anymore. So Hi-Rez decided to make a very radical decision: They are reverting her to her original kit.

This is pretty unheard of in games like this. Whenever a developer sets out to rework a champion, it's almost always done for a good reason, and then afterwards, they stick with it with the intent to make it better. Freya is the rare case where the attempt fails; even after her rework, she is still both grossly unpopular and still unfun to play as and against, which went against the very reason she was updated in the first place.

For the most part, the community is exhausted of Freya, and who can blame them? She bounces between mediocrity and domination like a pinball. Patch after patch and change after change, how many times can you adapt to a different experience?

As uncommon as it might be, I'm glad to see them acknowledge their mistake and attempt to rectify it- something I would love to see other developers do. There is no rule that a rework should be set in stone, and by nature of them actually going through with it, they understand that nothing has to be permanent. I do want to note that they aren't just doing this because of player feedback- They have hard data that Freya is near the bottom of the pack in popularity, and that peaks and dips at too large an interval to be normal.

Personally, I'm glad that old Freya is making a comeback. She was one of my favorite Gods from when I first started the game- though I'm also guilty of dropping her once she got locked in the nerf/buff cycle. I think that after the upcoming patch- and once I get that cool Weiss skin from RWBY- I'll give her a try again. After all, who wouldn't want to be the Queen of the Valkyries?

When not analyzing her favorite Valkyrie, Noelle 'Lyneriaa' Raine can be found doing...something of merit on twitter @Lyneriaa.
Posted by Natalie Raine at 1:14 PM