Bury Me, My Love Opened My Eyes To The Other Side of The World 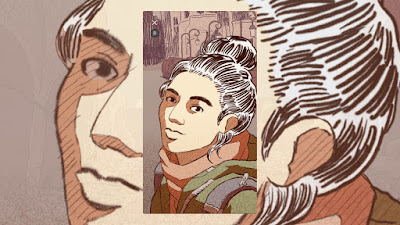 When I say 'Syria', what does that mean to you?

For me, it is the haunting images of the various atrocities that have taken place there in recent years. I'm very privileged in that I live somewhere where the threat of war where will never truly reach me- unless Canada and Mexico suddenly joins arms and actually that's a horrifying prospect. Because of that, I try to be at the very least aware of what is happening in places I've never been; so that violence suffered by people who aren't as lucky isn't suffered in silence.

I think that is why I enjoyed Bury Me, My Love. Beyond the well-written characters and story, it gives a glimpse into an entire world that the average person on my side of the world will never even think about. The journey you go through as you move from location to location, setbacks and all, is a sometimes hopeful, sometimes harrowing look into the life of a refugee.

You play as Majd, who is keeping in contact with his wife, Nour, through text messages as she makes her way from Syria to Europe. My biggest worry for a text message driven game was that the conversations would not feel organic, but both Majd and Nour are written well enough that they come across like a real married couple. They'll sometimes send each other silly pictures and spam heart emojis to each other- despite the fact they are already married(and more than likely have been for some time) when the game begins, I felt connected to these characters and their story in a manner I haven't felt since playing Celeste.

This makes it all the more harrowing when it's time to make choices during Nour's journey: Do you stay a day or two in the refugee camp, or leave as soon as possible? Do you trust the smuggler to get you across the border safely- even when he leaves you with a raft and seven other people? Is it better to keep your money in your shoes or your clothes? I often found myself verbally talking my way through each choice, keeping in mind that someone's life- the life of someone I cared greatly for- was in my hands. When things when wrong on my first playthrough, I cried; it was so abrupt and painful, and I knew that it was my fault, down to the decision I knew had sent everything over the edge. Despite the fact it was 4:30 in the morning and I had to work the next day, I started a new playthrough- This time, I'll get my loved one somewhere safe. 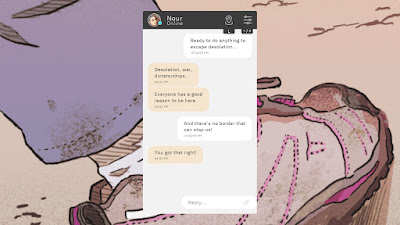 It wasn't until after, laying in my bed, that the ramifications of that bad ending moved me to think about Syria. Bury Me, My Love is a video game. I can play it again and again to get the desired result- and I will do just that.  For $5(though it was on sale for $1 when I bought it), Bury Me, My Love was well worth the price of admission. But...I can't help but spare a thought for the real people fleeing political violence. I made a mistake and I felt it, but I get the benefit of re-trying. There are hundreds of thousands of people without that luxury, and that's what my mind kept coming back to. I've had these thoughts before, but I don't think I was able to truly appreciate the difficult life a refugee goes through until this game.

This is honestly my favorite kind of game- engaging and relatable characters, choices that sting if you make the wrong one, and an experience I could never get anywhere else. Bury Me, My Love won me over as soon as I finished the introduction- it opened my eyes to the everyday experiences of the Syrian people in a manner that a news article could never replicate. It is part documentary, part art, part video game, and entirely worth it.

Noelle 'Lyneriaa' Raine, when not openly weeping over a preventable death, can be found on twitter @Lyneriaa. You can donate to the International Rescue Committee, which provides aid to Syria, here.
Posted by Natalie Raine at 1:33 PM