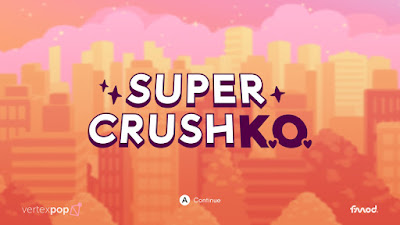 I feel like I ask a lot of my video games sometimes. I like extensively detailed stories, orchestral music, and hard questions about the measure of human nature. Super Crush KO has none of those things, and that is okay, because it doesn't need any of them to be fun.

The story is simple, but it's arguably the most relatable cause to rally behind: A woman named Karen is relaxing at home when an alien crashes into her house and steals her cat. Without a manager to speak to, Karen puts on her shoes and jacket and proceeds to beat the ever-loving hell out of every alien and robot between her and her pet, who is described as being the 'cutest in the world'(so said every woman who has ever looked at a cat). It doesn't explain why Karen is able to air dash, uppercut, and blast screen-clearing energy beams from her hands, and to be honest, I don't think it needs to. It's about a woman who wants her cat back; I probably wouldn't have taken it seriously if she was from some ancient line of alien punchers or some anime bullshit like that. 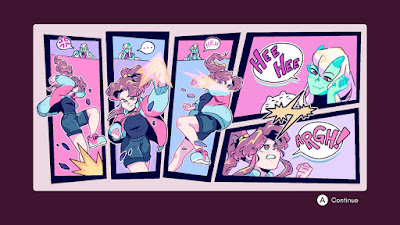 Packaged in this beautiful brawler is a gorgeous, pastel aesthetic with bright colors and chill music. I'm glad to see more beat'em'ups moving away from the dark street corners and alleys of older games into a brighter and more inviting atmosphere. River City Girls is a good example of this, and Super Crush KO keeps the good times rolling with bubblegum flavor that doesn't skimp out on the gameplay.

The game isn't very long- I completed it in a about an hour and a half- which may turn some people off, but this is definitely a game that shines in its replayability. You are graded on the time to clear, hits taken, and whether or not you've used a continue. If you can complete the segments within the level as one, nonstop combo, you get even more points as a 'perfect combo'. I lost count of how many levels I would play over and over again, because I took one hit. You only get the bonus points for not getting hit if you don't get hit at all; every time I finished a level and saw 'Hits Taken: One', I felt a part of myself die. 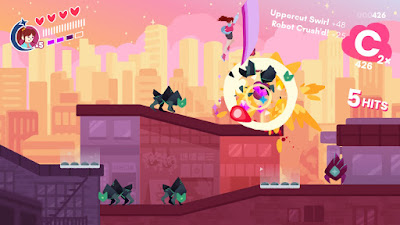 The gameplay is deceptively simple, to the point that when you do get hit, you know exactly what mistake you made and what to do to avoid it. Maybe you dodged too early, maybe you dashed too late- there is no blocking, only dodging. Once you get the attacks down and the timing right, moving through fights is like a continuous symphony, where you dash, punch, and shoot from enemy to enemy. As much as it bothered me when I got hit, the rush of euphoria I got when I cleared a level perfectly- no damage with as many Perfect Combos as I could- was worth every restarted run. And there were a lot of restarted runs.

The only real sore spot I had with the game were the bosses. There are four in the game, and all of them function pretty much the same way; right down to the attacks and movement patterns. the only thing that really changed were the monsters they would summon when their health got low- which all of them did at the exact same health interval. It does help that they're a nice warm up for practicing perfect combos and dodging, but I would have liked it if they stood out a bit more.

Despite that, I had a fun time with Super Crush KO.  Even though I was stressing over keeping my combos going from fight to fight, I never wanted to stop playing when I messed up.  You'll be in and out fairly quickly, but you'll also want to head back in over and over again. With a fair price point to match, I look forward to crying every time I get hit a single time, seven minutes into a level.

When not mentally debating the merits of shipping an alien and a human, Noelle 'Lyneriaa' Raine can be found thinking of other humorous bylines on Twitter @Lyneriaa.
Posted by Natalie Raine at 4:16 PM