I Hate That I Can't Love Destiny 2 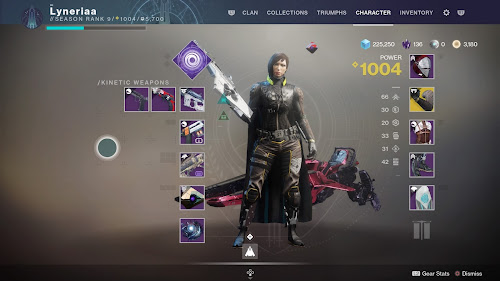 Destiny 2, once you strip away, well, everything that constantly goes wrong with it, is a fun game. I always try to remind myself of that whenever I'm disappointed. The fumes of optimism are what usually keep me trying the game over and over again, because I truly, truly want to find something to love. I think it's been long enough though, and that I've had enough. Across six years and two games, I can firmly say, I don't enjoy Destiny 2 as much as I should, and the blame for that lies firmly with the decisions made that keep holding it back, time and time again.

When everything is going right with Destiny 2- when the screen's exploding with new guns and armor, or when a bad PvP match turns around and we win the game- it absolutely soars. That's the sentiment that sticks with me when I write this: When it is good, it is very good. Nuclear take, but I've never played a game with gunplay as fun and snappy as Destiny. Bungie, at its core, still knows how to make its guns feel good, and that finesse is still bubbling beneath the surface of problems I cover in this article.

Let's start with the very foundation of what is wrong: As it stands, loot in this game is essentially meaningless. In most loot-focused games, there are various tiers for each level of reward, usually defined with a name and color associated to help them stand out; Typically, they're referred to as common(usually color coded white/gray), rare(blue), epic(purple), and legendary(orange). In theory, each of these should be both more difficult to obtain and more rewarding to have the higher in tier the item is; you'll never see common items in someone's endgame Diablo 3 build, for example.

In Destiny 2, however, there is virtually no sense of accomplishment from anything other than grinding for exotics(or 'legendary' items). Destiny's system is a more constricted Rare(blue) > Legendary(purple)> Exotic(yellow). Because common items(other than gear you have at the very beginning of the game) don't exist and rare items are the most common drop you can get, it has actually devalued every item by one rarity level; rare items are mean nothing other than to be quickly dissembled when you find something better- sometimes within the same activity- and legendary items don't 'feel' legendary, they just feel like a step above the previous, more common tier, like rare items in other games typically feel.

Because of that, I could not care less about any of the gear I get, especially when rolling a new character. All of it has such a minuscule effect other than slightly raising your Light level(the average strength of all your gear, similar to item level in an MMO) that it doesn't even register as, 'oh, this is a new item, I should be excited'. Which is the entire reason you play games where a large focus is collecting new loot. Because of that, the notion of a grind is much stronger in Destiny, which I talk more about later.

Another big MMO staple- and because Destiny insists on using descriptions like that, I'm going to hold it to them- is the story behind the world you inhabit. Bungie's time with the original Halo trilogy gives me hope that one day, the storyline for Destiny 2 will become more than a muddled mess. But it's been more than half a decade now, and I'm still very saddened that I just...do not care about Destiny 2's story. Regardless of the direction it goes, be it from the expansions or each of the game's Seasons, they are still building upon the same unsatisfying bones before it. Watching Cayde-6, the only vaguely memorable character in a game filled with forgettable faces, die in the beginning of Forsaken was akin to seeing Bran Stark become king in Game of Thrones. Yes, it felt that bad.

Destiny's world, where space wizards blast force lightning and space hunters draw 007's Golden Gun, is ultimately boring. Every location, every enemy, every quest giver, all of it reeks of a boring sameness. I've killed so many Fallen, Vex, Hive, and Cabal that they don't even register as different enemies. That's not even mentioning the fact that we still have the same three playable classes we had in the original Destiny. That painful sameness brings down the experience as a whole. I don't know if I would lean so far into the description that I would consider it generic-even if it comes dangerously close- but the worrying thoughts are there.

The gameplay itself should be the saving grace; I can tolerate a boring story or subpar graphics if the game itself is fun. Destiny's fun, however, is built on how much you can tolerate the grind. Destiny has been, more than any other game I've ever played, a grinding simulator. Like it or not, some level of grinding is fairly common in many games, particularly in RPGs or anything with a long-form progression system. I don't begrudge Destiny for simply being grindy; Final Fantasy XIV is a little grindy, but it's also the best Final Fantasy game ever made, so I don't mind grinding for endgame weapons and armor, because the game itself is fun.
I do however, moan about the fact that Destiny has always been nothing but grinding. I can almost look past it, but when you factor in that a lot of the rewards you get while grinding have no sense of accomplishment, it ultimately cheapens the experience. Armor 2.0, the massive rework to gear in late 2019 that added several base stats that shorten cooldowns, increase movement speed, etc. was meant to help shake up that armor was little more than another number for your light level. Unfortunately, I played through the Destiny 2 base game, Forsaken, and started Shadowkeep without even acknowledging Armor 2.0. What did it matter? Until I grinded my way to endgame, what did these stats matter for me as I went about my life as a Guardian?

Nothing. Nothing at all. Unless you're endgame min-maxing your stats, Armor 2.0 is still just as forgettable as Armor 1.0. This is a problem when you consider that, Destiny has been leaning very dangerously in its most recent seasons as offering more grinds with little satisfaction at the end. Sometimes that means grinding for weapons you already have. Sometimes that means getting nine million total completions to progress a quest that rewards you with the opportunity to get 1000 shotgun kills so that you can then get a Shotgun that was originally in the first Destiny.

Noticing a pattern? Even the current season has people AFK grinding public events because the leveling process has burned so many players out. Destiny 2 is built on this grind, and that is what makes me so upset; there is so much potential for Destiny 2 to be something other than either 'It's alright' or 'it's pretty bad'. But this occasionally fun game is constantly being held back by missteps that are not only painful, but constant. The most mind-blowing thing I realized over getting back into Destiny 2 is that, over the course of my time with the franchise, there has never not been a time where I was grinding for something or something was bugged or I just get so burnt out on the same routine, over and over again, that I drop the game and do something else.

This game is an emotional cycle, and I think that, once my time with this expansion ends,  I'll be cashing out for good. When I like Destiny, I love it. When the stars align and the game fires on all cylinders, it's one of my favorite experiences. But to reach that happiness, I have to suffer through a flawed loot system, a convoluted and somehow still uninteresting story, and a grind akin to a 9-to-5 desk job. It's sad, because even though my mind is still sometimes drawn to what good is there, I don't think the good can save Destiny 2's flaws. There are at least three more expansions on the way, so for now, the best I can do is hope that Destiny's destiny is not a mediocre one.

When not, literally, falling asleep playing Destiny 2, Natalie 'Lyneriaa' Raine can be found staring longingly out her window on twitter @Lyneriaa.
Posted by Natalie Raine at 7:32 PM