Grounded's Arachnophobia Slider Should Be The Standard 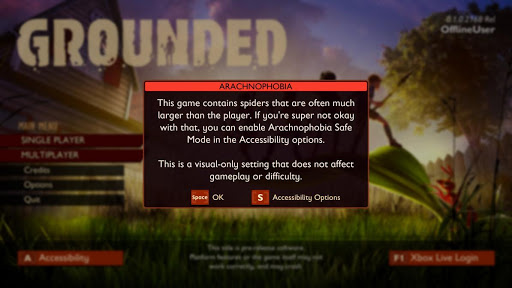 Grounded, the most recent game from Obsidian Entertainment, has a lot going for it as a survival game in The Time of the Battle Royale. Rather than surviving on an island or forest, Grounded takes place in your own backyard, and instead of dinosaurs and zombies, you're now face-to-face with many of the bugs hidden under the tall grass. As someone who is no longer bothered by giant dinosaurs and shambling corpses, but is terrified of spiders, this is scarier than both the formers combined.Not only are the spiders naturally terrifying(Google 'spider faces' and tell me how well you sleep tonight), they are also huge. Most of the bugs in Grounded(especially the ants!) are cute and adorable by comparison, but the spiders are enormous, with high damage and sticky webbing. On their own, they're fearsome enemies, but to an arachnophobe, they become a wall that stops play altogether.
I've been arachnophobic for most of my life. Do you remember that shitty movie from the early 2000's, 'Eight Legged Freaks'? I was definitely too young for that movie the first time I saw it. Because of it, I tend to go full blown panic mode if a spider is within five feet of me. Even in video games, I can't take a realistically-modeled spider whatsoever, big or small; Dragon Age: Inquisition became a horror game after the opening where you are chased down by a horde of the creatures, and Skyrim was virtually unplayable after the first time a Giant Frostbite Spider fell down from the ceiling.Spiders are about as common a video game enemy as rats in an RPG or skeletons in an MMO, to the point that they are almost padding a game's enemy list. As an arachnophobe, that means there is an asterisk next to any new game with a focus on hunting creatures. Anything that appears to be a cave or dungeon puts my hair on edge, because there is always the chance that a spider may scuttle out of a corner and end the experience for me. Because of that, Grounded was a game I wrote off as soon as I saw the trailer. Because the premise was that you were shrunk to the size of insects, my mind went directly to the thought of giant spiders thinly veiled behind blades of grass, or even worse, turning a corner and having one in my face like an arachnid jumpscare. Unfortunately, this game was effectively dead on arrival for me.At least, it would have been, had the developers not added a special option for people like me. If you scroll through the accessibility options, there will be a slider that decides just how nightmarish you like your eight legged freaks, from Oh god get it away to adorably bouncy bubble bloblets. 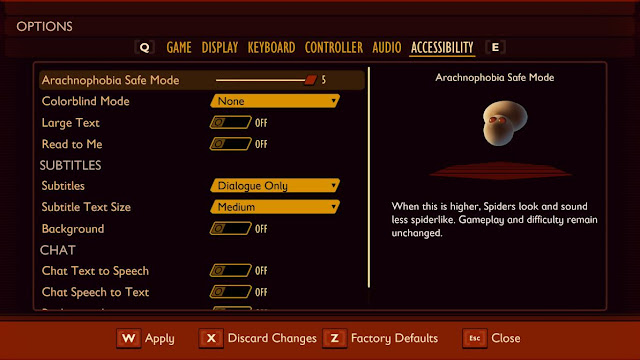 This is something that I've dreamed about for years, and Grounded is the first game to take steps to help arachnophobic players like me. It's such an elegantly simple fix that I need it to become the standard as an accessibility option. That anxiety that comes from not knowing whether or not I will have a panic attack from a surprise spider is something that exhausts me whenever I try a new game. To be able to play something new and know that my phobia will not be triggered takes such a grand weight off my shoulders that words can't explain. I would really love it if other developers take this cue from Obsidian and implement this slider going forward. Let me enjoy exploring dungeons again without any arachnid surprises. Let me play survival games and not have the experience end because another spider mob is impeding my progress. Arachnophobia sliders being the next step in accessibility options would make a very compelling case that developers are willing to learn more and more about what does and does not makes their games accessible, even if the end result is just one more arachnophobic person happily enjoying their game. *** Natalie Raine writes about video games when she isn't clearing her schedule for the next Final Fantasy XIV update. Her Twitter is @Lyneriaa if you like that kind of thing.
Posted by Natalie Raine at 2:27 PM