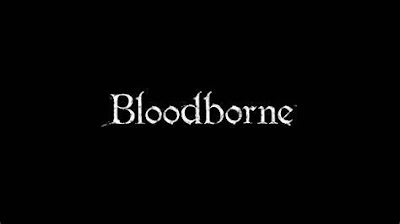 I've always had a really weird nitpick with the Souls series.

Many of the series titular bosses are mostly 'wrong place, wrong time' affairs- outside of the obvious plot-significant ones, there really is no reason to fight them other than they want you dead. It didn't stop me from enjoying the series as a whole-for the most part- but it's always been something that bothered me. And it only became more prevalent after I experienced Bloodborne.

There is no running from the giant, monsterous beasts that plague Yharnam, the setting for arguably the best in the Soulsborne series. The Chosen Undead in previous games has always had a grand job to do, something that leaves the fate of the world in the balance. Bloodborne is much simpler and honest in its scale; you are a hunter, and there are beasts to hunt. Yes, there is an intricate story that pulls you forward(mostly in the item descriptions unfortunately), but your goal is the same regardless of it: There are beasts in Yharnam, and it is your job to hunt down them all.

That feeling of duty has always made the boss battles in Bloodborne feel more personal in a way I adored: There is no running away, no 'wrong place, wrong time'. This time, you're charging forward. 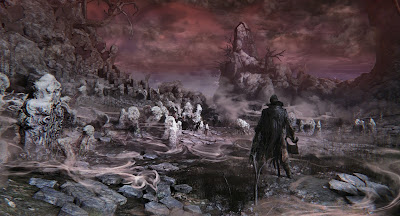 It took me a while to decide what was the best feature in Bloodborne, because the entire package is strong. After a while, I settled on the enemy design. They begin small(in a manner of speaking; a beastly werewolf-like creature is the first enemy you come across), with various beasts and the like intent on shredding you to ribbons. By the end of the game, however, things go from Castlevania to Lovecraft very quickly. Nightmare fuel does not describe the enemies you face towards the second half of the game. They are almost indescribable in their horror, and you will cut them down all the same.

That is the driving force of Bloodborne, and it was what made me keep going again and again when I was oh-too-easily reminded how fragile life is. These beasts are not a means to an end, a road block on my way to some pre-ordained odyssey; no, it was my duty to the people of Yharnam that I slay these monsters and end the Hunt that plagues the town. Even when the bosses grow towering in scale, triple the amount of limbs they have, and even invoke the power of the Cosmos, I was still walking forward, Saw in hand, to slay these walking nightmares.

It helps that, despite the smaller number of weapons compared to other games, each feels unique and personal, largely due to the fact that every weapon has a second form that builds upon the first.  A threaded cane can split into parts and be used as a whip. A sword can be sheathed into a giant stone block and turned into a hammer. The creativity in both weapons forms made finding a new one cause for celebration. While I ultimately settled on the Rifle Spear- a spear with a shotgun in the barrel- the DLC blows the base game's weapons out of the water, and the best weapons are there for those who don't mind the borderline-ludicrous challenges that keep them locked away.

I advise you to pick well, because Bloodborne does not pull any punches for a fledgling hunter. This game is very difficult, but not impossible. You will absolutely die over and over again, and there are a few attacks that will have to kill you several times before you learn how to avoid them, but the euphoria that comes from slaying the nightmares of other nightmares is unmatched in any other game. Whenever you kill a boss, the message 'Prey Slaughtered' appears on the screen, a fitting touch for the emotional rush you'll feel when you finally defeat the beast that's been plaguing you. There were a few times I swore I would stop trying, only to give it one more go, make one more adjustment, and land the killing blow. It made the dozen deaths before worth it, every time. 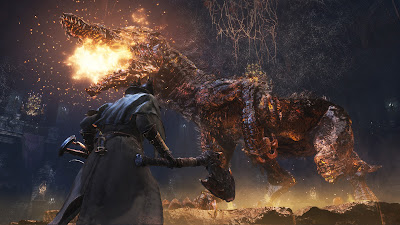 While the bosses themselves are terrifying, the trek to reach them is much, much worse. While Central Yharnam, your starting point, is eerily quiet, the environments grow more and more horrifying with each beast you slay. As you progress further and further, you see just how far the nightmare has spread to the nearby regions. The game is not afraid to prey on your anxieties or occasionally even jump scare you to keep you on your toes. There was a point where I, with no interest in fighting the nightmares before me, sprinted past all of them, only to run into a boss that actually made my jaw drop from how utterly repulsive it was. It was a horrifying, vulnerable feeling being surrounded by beasts I could never imagine. But it only made it that more satisfying when I cut them all down.

That was what Bloodborne was for me, personally: Facing your fears, and then sawing them to pieces. I walked through my nightmares over and over in Bloodborne, but not once did I run(Except this time because no, really, have you seen this thing?), and not once did I look away. Always calmly, I walked forward and slew every nightmare I saw until the haunting true ending made me lose sleep mulling over it. And then, I clicked New Game+ and did it all over again. Except the second time, I used the chainsaw.

You know where this is going, but there is one more question that must be answered:

Should you play Bloodborne?

Long answer? Yes,without a doubt. Even though I was scared, vulnerable and defeated over and over again, I would dust myself off each time, because I knew that I could kill whatever nightmare From Software would throw at me. In Dark Souls, you feel like the prey most of the time; trying to make heads or tails out of the situations the game throws at you as the NPCs offer Shakespearian platitudes. Bloodborne asks a much simpler question, harshly, but directly: Are you the prey, or are you the hunter? I chose to be the hunter, and hopefully, so will you.

When not waving her torch at monsters ten times her size, Noelle 'Lyneriaa' Raine can be found sharpening her rapier- okay, her butter knife- wit on twitter @Lyneriaa.
Posted by Natalie Raine at 4:07 PM